Metrocurean is pleased to introduce this new feature, written by my friend and fellow food writer Melissa McCart of Counter Intelligence. Melissa goes behind the kitchen line to learn what's cooking at DC-area restaurants. She explores ingredients, techniques and trends embraced by the city's top chefs. 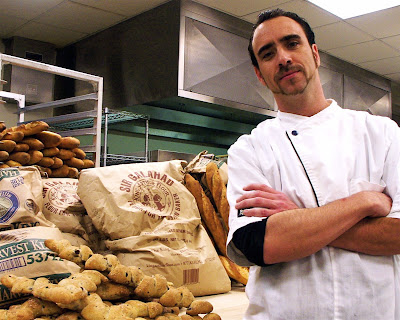 Patrick Deiss heads up the bakery at 2941
Photo by Sara Poole
Several bakers shaped baguettes on a huge maple table, patting and rolling dough into form with their hands. The scent of baking bread wafted from big ovens. It was 8 a.m. last Friday morning. I had found my way into the bakery at 2941, where chef Patrick Deiss welcomed me to an impromptu morning of bread baking 101.

"The most gratifying, most frustrating part of bread baking is the sourdough loaf,” says Deiss, baker for 2941 under executive chef Bertrand Chemel. “It's like a marriage. You have to work at it.”

Deiss was seduced by sourdough in San Francisco, during a month-long session at the San Francisco Baking Institute — one of the most renowned culinary schools of its kind. He returned, armed with a San Francisco dough starter. “Water, natural yeast in the air and humidity of the San Francisco Bay area all affect the flavor of sourdough. And it’s part of what makes it so delicious.”

Deiss went to baking school inspired by Chemel, who left New York’s Café Boulud to helm 2941 last year after the departure of chefs Jonathan Krinn and Jon Mathieson for Inox. The restaurant already had a reputation for great artisanal bread, thanks to Krinn's father and resident baker, Mal.

Chemel said he wanted “a refreshing take on traditional breads,” so Deiss threw himself into learning. He traveled the world sampling boules, baguettes and various loaves in New York, Paris, Chicago and San Francisco. He scrutinized the crumb size, flavors and density of breads. “I was also looking for presentation as much as taste,” says Deiss. “Bread carts, mini loaves, you name it.”

Back in the kitchen of 2941, Deiss spent months practicing. “I knew I needed some time to play around, so I'd try one or two things a week,” he says. Several months later, Chemel, Deiss and the staff were ready to offer customers a variety of artisanal breads, eventually baking 150 loaves of several kinds a day.

These days, Deiss continues to experiment, using a four-step process he honed at school, which includes pre-shaping and proofing before baking. Though he’s always working on something new, customer favorites include the chocolate cherry baguette, an olive rosemary baguette and, of course, white and honey wheat sourdoughs, the most temperamental. “If the dough isn’t tended to every six hours or so, it falls and you have to start over,” he says.

Expect to see Deiss’ bread available for retail around the area soon, he says. In the meantime, you can pick up loaves for home at the restaurant by calling 703.270.1690.