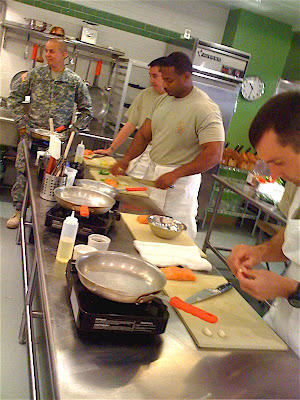 Soldiers participated in a different kind of boot camp this week at CulinAerie.
Photos by Melissa McCart
Melissa McCart of Counter Intelligence goes behind the kitchen line to see what's cooking around DC.

"What would you like for your last meal?" It’s not some kind of foodie fantasy question. It's Susan Watterson's request of eight soldiers from a US Army Special Forces unit based in Fort Bragg, NC, for their final day of boot camp. Culinary boot camp. 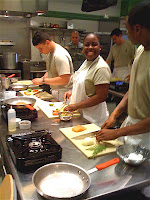 Watterson, co-owner of CulinAerie in downtown DC, has been leading an intensive culinary training session for Army cooks for the past two weeks. All eight cooks, whose ages range from 22 to 42, will be deployed to Afghanistan in July. Each of them have been before; some as many as seven times since 2001.

Watterson worked with Master Sergeant Arthur Vernon and Staff Sergeant Hunter Blankenship for months to set up a program to hone the skills for these cooks who make meals for 600 to 800 people a day in 12- to 14-hour shifts.

"It was difficult to convince the Army that a civilian cooking school was good for our unit," says Vernon, since it's expensive and somewhat of an experiment. Cooks at Fort Bragg and elsewhere have not sought staff training among civilians to improve culinary skills, as far as he knew.

When securing permission for the class, Vernon argued improved skills would cut down on waste, saving the Army money in the end. He said that they’re not trained to use scraps the way a civilian kitchen might — in stocks, stews or stuffings, for example. In addition, "There's so much boil-in-a-bag that cooks are losing their edge," says Vernon. "We wanted to be more inspired and creative." 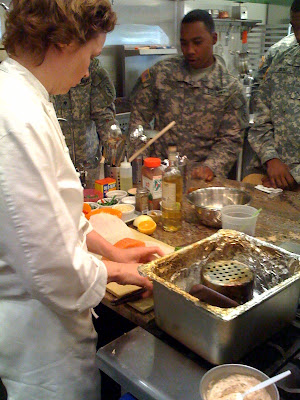 Susan Watterson leads the culinary boot camp.
The military has an advanced food service course in Fort Lee, Va., according to Blankenship, "but they don't have the same skill set that Miss Susan has here," he says of Watterson.

Blankenship and Vernon called dozens of culinary schools around the country, including the Culinary Institute of America in Hyde Park, NY, before settling on CulinAerie. Most programs were too long. Despite that the group could travel anywhere, they had less than three weeks to train.

The soldiers were enthusiastic about cooking school primarily because they wanted learn how to substitute and cook without recipes, using the ingredients they had access to — juice boxes instead of fresh squeezed, corn starch instead of cream, dried seasoning instead of fresh herbs.

And as for Watterson's question to wrap up the boot camp, the answers came: "Hamburger Helper," a soldier deadpanned. "Chili Mac." "Top Ramen." "Yakisoba." "Anything with Texas Pete." That last request is especially popular. Watterson teased back. "Did we not learn anything in these two weeks?" They did, they said. It's why they're glad to be here.

Classes ended Wednesday. They’re graduating today: a feast of a celebration that does not include Hamburger Helper.