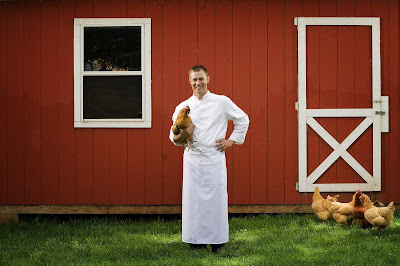 This past week, on a sunny morning post thunderstorm, I joined Volt chef Bryan Voltaggio at Whitmore Farm in Emmitsburg, Md., as owner Will Morrow gave a tour. Voltaggio, a new customer of Morrow's, was checking out the property, just a few miles south of the Pennsylvania border, as a potential spot for a farm dinner in the fall.

Voltaggio nodded to a gorgeous, renovated barn atop a knoll as a possibility. On a sunny day with a view of the mountains, we could imagine it the perfect place for an elegant dinner. That day, doors on rollers exposed bales of sweet-smelling hay.

The chef headed down the hill toward a chicken coop to inspect heritage hens that provide eggs for his restaurant. This isn't your average henhouse. The curtains framing each coop are denim. It's quaint and white, like a dollhouse. And it's on wheels so it can be carted around the farm to fertilize land below.

Back at Volt, which Voltaggio opened in a historic Frederick, Md., mansion in the summer of 2008, the chef uses the farm's eggs for an early course at "Table 21," a four-seat counter facing the kitchen. Flanked by the whimsy of a pair of flying pigs, Table 21 features an extensive tasting menu of seven experimental dishes, seven more traditional crowd-pleasers, and seven plates that showcase savory to sweet desserts.

"Table 21 is for foodies and non-foodies alike," says Voltaggio. "In one sense, it's a degustation-style menu. But people understand it when they're done."

One course includes eggs three ways: a custard, scrambled with truffles, and sous vide with soy and kaffir lime. Voltaggio also gets playful with nitrogen frozen coconut with vanilla and lavender, as well as "noodles" of caramelized onions served with frozen foie gras.

Seats at Voltaggio's Table 21 run $121 per person, wine pairings not included. Reservations are available at 7 p.m. Wednesday, Thursday and Sunday, and 5:30 p.m. and 8 p.m. Friday and Saturday.

And as for that farm dinner in the works for this fall? Keep your eyes here for details. In the meantime, a trek to Volt's Table 21 is a summer excursion to mark on the calendar.