Zentan Fills In Where Cha Left Off 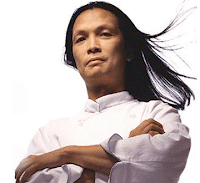 Via ZagatBuzz and HotelChatter comes news that the restaurant in the Donovan House hotel, which had been in celeb chef limbo, will open next week as Zentan and will be under the direction of chef Susur Lee (pictured) of Shang in New York.

Back in April, I reported that Todd English had backed out of Cha, the original restaurant concept for the space. ZagatBuzz said Lee, who had already partnered with Thompson Hotels (creators of the Donovan house) for Shang, would likely take over.

From Zentan's web site: "The restaurant will feature Chef Lee's bold and inventive approach to pan Asian cuisine, and the menu will feature favorites from Shang in NYC and his restaurant, Lee in Toronto. The menu will also feature a selection of sushi, sashimi and Asian crudos available at the rooftop lounge this summer."