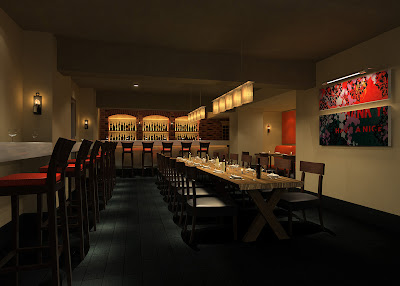 The W Hotel's intimate wine bar is just down a flight of stairs
from Jean-Georges Vongerichten's J&G Steakhouse, both opening next week.
rendering courtesy W Hotels
Loyal readers know how invaluable Metrocurean's Coming Soon list is, but if you haven't checked it out in a while, there are a bunch of new additions to the list. Give it a read and impress your friends with your immense knowledge of restaurants to watch. A sneak peek:

• Plume
Jefferson Hotel, 1200 16th St. NW
Executive chef Damon Gordon, whose résumé includes stints at Alain Ducasse’s Mix in New York City and the Michelin-starred Waterside Inn in his native UK, will preside over the kitchen at Plume in the newly renovated Jefferson Hotel. HotelChatter got a preview of the menu, including steak tartar, chilled tomato consommé and hot passion fruit soufflé. Guests will dine beneath a 1923 vaulted skylight rediscovered during the hotel’s renovation.
ETA: August

Stay tuned for more on next week's huge opening: the W Hotel with Jean-Georges Vongerichten's J&G Steakhouse, plus an intimate and chic street-level wine bar, and Point of View, the gorgeous rooftop terrace and bar (above). The cocktail program was created by Sasha Petraske of Manhattan's famed Milk and Honey and Little Branch and DC's own Justin Guthrie, formerly behind the bar at Central. The menu will feature hits from Jean-Georges Vongerichten's Spice Market and other restaurants.