A Far-Flung Fish Finds Its Way To DC 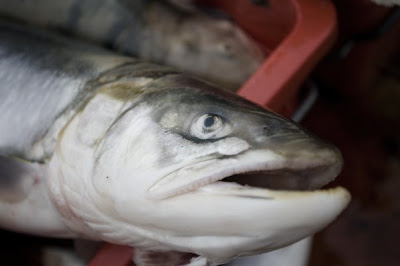 Nunavut wild Arctic char has found its way into a few DC restaurants.
photos courtesy of CleanFish
About mid-way through a decadent procession of 21 small courses at Volt's Table 21 a few weeks ago, a small square of vibrant pink fish, perched atop ruby quinoa, summer squash, chorizo and sherry vinaigrette, landed in front of me. The gently cooked flesh, with a flavor more subtle than salmon, was firm and blissfully buttery.

Chef Bryan Voltaggio, who was cooking just 10 or so feet from the chef's table, explained that the wild Arctic char on our plates came from a remote northern region of Canada, where the fishing season only runs about eight weeks, when the ice breaks, and lasts until early September. The Inuit people there have been fishing the waters for more than two thousand years. 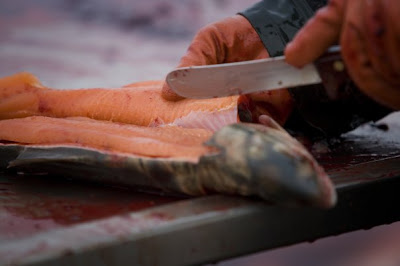 The wild char they catch are now making their way from the far-flung Nunavut region into the US market thanks to CleanFish, a San Francisco-based company that won an Eco-Ocean Award from Food & Wine last year.

Voltaggio is one of a handful of DC-area chefs now serving the Nunavut char. You can also find it at BlackSalt, The Inn at Little Washington, Poste and Villa Mozart. 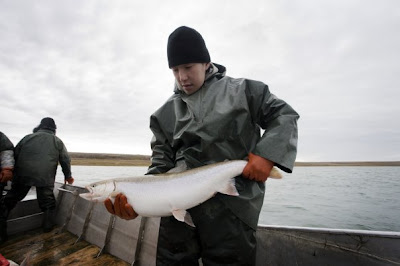 The fish, a relative of salmon, is caught using net and trap methods. “This is one of the finest examples of artisan stewardship in wild fisheries on the planet,” said Dale Sims, co-founder and fishmonger of CleanFish, in a release.

The char is not only a sustainable choice, but also a healthy one since it's packed with omega-3 oils. The catch also provides important income for the Inuit.

“One of the Inuit’s core beliefs is the sustainable use of natural resources," said Brian Zawadski, spokesperson for the Nunavut Development Corporation, in a release. "This belief has been around longer than the common usage of the term ‘sustainable harvest.’”