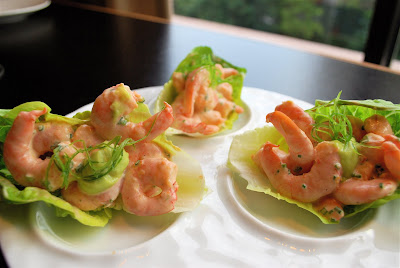 Ok, so lettuce wraps have been around a while — a long while in Asian cooking (see: ssam). They were certainly popular during the carb-cutting diet madness and are still popular on chain restaurant menus (see: P.F. Chang's). But that really belies their foodie cred.

Now, thanks to the ascension of street food, some of the hottest chefs are elevating the leafy packets to high-end menus. In addition to The Source and Bourbon Steak, you can find upscale versions in DC at Zentan, where lobster and shrimp dumplings are wrapped in greens, and at TenPenh, where the lunch menu offers stir fried chicken with mustard sambal in lettuce.

I love that a fresh lettuce leaf can turn foods like The Source's delicious stir fried lamb into a portable dish. And for crunch fans (potato chips on your sandwich, anyone?), you can't beat that cool, crisp snap.

Here's a few lettuce-wrapped recipes to try at home: