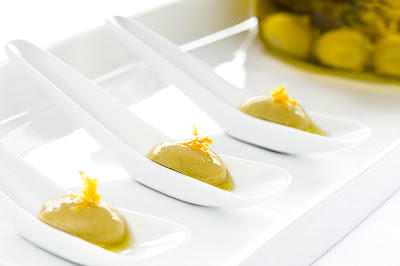 Liquid olives at your next cocktail party? Why not, thanks to a new partnership between José Andrés and Ridgewells.
Photos: Powers and Crewe
Nothing says party quite like an eight-foot paella.

Last Wednesday, chef José Andrés unveiled his new catering partnership with Ridgewells during a swanky shindig at a stunning home in Chevy Chase. Right in front of the home's pool, a massive paella sent garlic scented steam into the air, while a nearby machine spun wisps of fluffy pink cotton candy to wrap around skewered squares of foie gras. Servers passed trays of liquid olives that delivered bursts of briny juice, and when time came for dessert, there were saffron gumdrops, flan and Greek yogurt cups with apricots.

The idea behind the new catering union is to take the food that makes Andrés' restaurants so popular — the avant garde bites from minibar, baby pig tacos from Oyamel, and that giant version of Jaleo's paella — and make it available for parties. 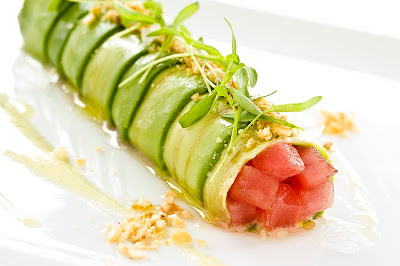 Andrés' version of guacamole.
"I love to have parties — in my home, out with friends, in my restaurants — and I can think of nothing better than helping people successfully entertain in their own homes or staging amazing parties in unbelievable venues," Andrés said in a release.