Though the place hasn't been spit-polished, brothers Derek and Tom Brown are throwing open the doors to The Passenger (1021 Seventh St. NW), their first solo venture, this evening at 5 p.m.

The new joint is kind of a neo-speakeasy version 2.0. It subtly nods to the Prohibition era (Derek was donning a vest at last night's preview) but it's a less contrived, more relaxed take on the trendy genre. 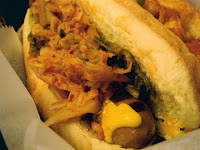 Sure, you can snag a well-balanced craft cocktail the Brown brothers are known for. But there's also Miller High Life, plenty of canned beer, beef jerky (albeit artisanal) by the stick, and a delicious kimchi hot dog (left).

Oh, and there's isn't a cocktail menu. "I appreciate cocktail lists for what they are, but they don't really tell you what a drink's going to taste like," Tom explained. Instead, he prefers to get to know guests preferences and create cocktails to suit them.

Derek will take that philosophy a step further when he opens the Columbia Room, a reservation-only bar within a bar, probably early next year. Plans are still taking shape, but the cocktail "lab" will most likely seat about 18, and Derek will make custom cocktails with a limited line-up of five or so spirits and housemade ingredients.

Claiming that "99 percent of people will hate this experience," he speculates the Columbia Room will appeal mainly to those die-hard cocktail lovers who like to dork out over ice cube shapes. The Columbia Room "is our world, just let us be geeks in it," he joked.

Launching with a few rough edges, like the unfinished room dubbed the dining car, hammers home that the new drinking destination doesn't take itself too seriously.

For a peek at last night's preview, ReadySet DC has some nice photos (cause Vincent had a way cooler camera than me).