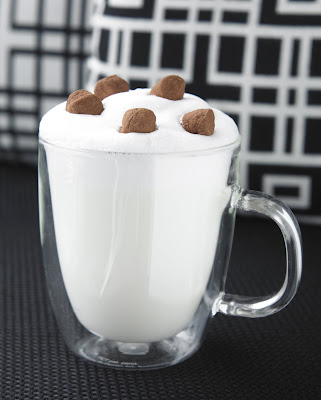 The hot "not" chocolate at P.O.V.
Photos: Allison Parent

I had the chance to cozy up on the W Hotel's P.O.V. Roof Terrace this week (plush blankets thoughtfully included) to sample barman Justin Guthrie's wintry creations, including the hot "not" chocolate, a creamy blend of spiced rum, vanilla, milk and cocoa-dusted marshmallows. (They've got the traditional stuff, too.) 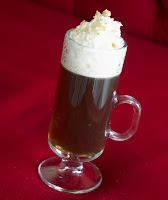 For the intimate media cocktail preview, Guthrie also whipped up a drink featuring an ingredient I can't say I've ever had in a cocktail, however commonplace — peanut butter.

The hot peanut buttered rum (at left) takes booze, infuses it with peanut butter, adds a little butter, clove, cinnamon and whipped cream topped with crushed peanuts — all to delicious effect. All winter cocktails are $10.

Speaking of seasonal imbibing, last week I tasted Jason Strich's delicious Kentucky pie cocktail at Rasika, which I hear scored him the regional Domaine de Canton bartender of the year honor. In this liquid spin on a seasonal pie, Jim Beam is mixed with sweet potato syrup and Domaine de Canton ginger liqueur and topped with a toasted marshmallow crown.

So, which bars will you hit for a winter drink fix?