Making Bread's Not So Scary 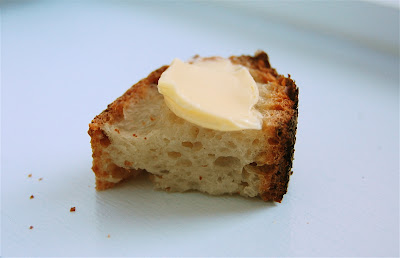 I may be hooked after a first bread baking attempt.
"There are two kinds of people in the world: those who bake bread and those who don't." That's how The Gourmet Cookbook opens its chapter on bread.

But I'd like to add a third: People who make pizza dough but don't make bread. That's where I fit in.

Pizza dough I have down. I've been known to sweat it out over a hot charcoal grill cranking out pizza after pizza for friends and family. Truly a labor of love.

A loaf of bread? I was a total novice. Until Sunday. 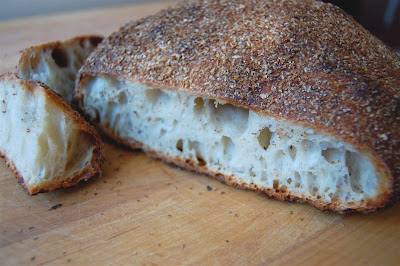 My somewhat flat no-knead bread.
I needed a gentle nudge to get me forming loaves, and that came from Liz of The Hill is Home, who directed me to a Snowpocalypse bread baking challenge (with recipe) over on Samuel Fromartz's site Chewswise.

Following the now-famous no-knead recipe, originally from Jim Lahey, I made myself a loaf of bread. Albeit a somewhat flat loaf of bread. But it's delicious and moist, a tad chewy inside with a crunchy, toasty crust.

I sliced off pieces all afternoon, smearing them with soft butter. I toasted it this morning, topped with Copper Pot pear ginger jam.

I do believe I've been bitten by the bread baking bug.

So tell me, brilliant readers, do you bake bread? And I would love to hear about your favorite recipes or cookbooks for learning. Because now I'm hoping to be one of those people who bake bread.