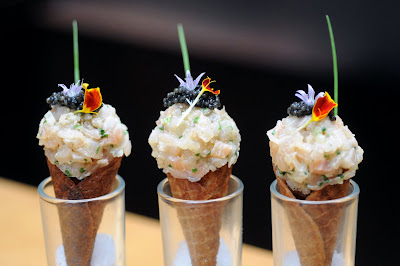 Salmon tartare cones, one of 20 bites on Poste's special menu.
Photo: Michael Harlan Turkell
I'm full but not uncomfortably so as my 20th (yes 20th) dinner course, a warm chocolate bread pudding, lands in front of me.

The 19 courses that preceded, like a dainty cone of steelhead salmon tartare and the petite pan of crispy pig's tail, were perfectly manageable, more bite sized than entree sized. And that's the idea behind Poste chef Rob Weland's "20 Bites" menu, which (as a guest of the restaurant) I had the opportunity to eat my way through the other night.

Once upon a fine dining time, a decadent multi-course tasting menu featured a single-digit number: five courses, maybe seven or nine if you were really up for a big night. But more chefs are pushing the numbers game, taking the traditional multi-course menu and super sizing it.

It sounds positively indulgent, but in practice, when well-paced and well-portioned, these types of menus don't offer an obscene amount of food. Many times, a "course" is really just a bite or two. As Missy Frederick noted, it's perfect for an indecisive eater who wants to try a little of everything.

At José Andrés' minibar, a pioneer of the multi-bite menu trend in DC, the course count tops out around 30. Chef Bryan Voltaggio treats guests at Volt's Table 21 with ... you guessed it, 21 courses.

Interested in testing your stomach's course capacity? Here's where you can get a mega multi-course dinner (prices typically do not include tax, tip or drinks):

• minibar: Reservations are nearly impossible, but once you're in, the 25 to 30 course menu costs $120 per person. For info on reservations, visit the web site.

• Vidalia: Chef RJ Cooper just launched Vidalia "24," available Friday and Saturday nights for up to six people. The cost is $150 per person, which includes a beverage pairing. Reservations: 202.659.1990