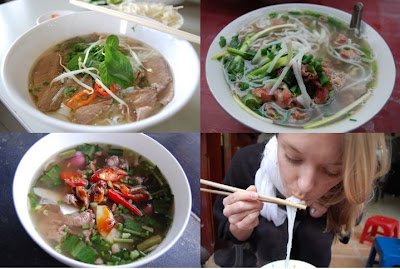 Me and my adventures in pho in Saigon, Hanoi and Hoi An, Vietnam.
metrocurean photos
It was back in December 2007 that Metrocurean first discussed pho, and you helpful readers gave loads of good suggestions on where to get the best versions of the Vietnamese noodle soup in the area. (Pho 75 is a favorite of commenters and chefs.)

Two years later, I headed to Vietnam and had the chance to eat the native soup on its home turf. Pho bo (beef) was breakfast most mornings during our two-week stay in the country in December. If my husband and I didn't get a morning fix, we'd go hunting for afternoon soup. My love affair was sealed.

Back in the States, international foods traditionally served from stalls or carts have been coming in off the streets and getting gussied up in restaurants. And I think pho is about to have its crossover moment.

A few weeks ago at the upscale PS 7's, while being treated to Gina Chersevani's seven-course cocktail and food pairing menu (details here), chef Peter Smith presented a small dish of duck pho to pair with Gina's spin on a shandy made with Miller High Life. A fun pairing and a fun twist with the tender duck subbing in for beef or chicken.

And just last night at Bar Pilar, I spied a bottle of Sriracha on a table. Come to find out, chef Justin Bittner was serving up a special of pho, so I of course ordered some (with my fried chicken and biscuit). The broth was dark, flavorful and perfumed with spice, and the dish would hold its own against the best versions I had in Vietnam.

I say the more places to find good pho the better. Thoughts?