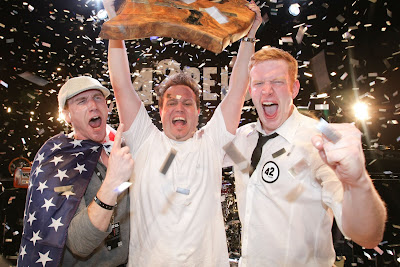 Team USA, led by Todd Thrasher in the center, takes the World Cocktail Cup prize in New Zealand.
A cocktail titled "I have too much thyme on my hands right now at this point in my life," created by the DC area's own spirits savant Todd Thrasher, led Team USA to a victory in the sixth annual 42BELOW Cocktail World Cup. The winners were announced this weekend in New Zealand.

Thrasher, of PX, Restaurant Eve and The Majestic, crafted the cocktail with 42BELOW Pure Vodka, apple bitters, lime thyme syrup and an artichoke aperitif.

He was joined on Team USA by Mark Stoddard of Denver and Sean Hoard of NYC. From thousands of bartenders around the world, 24 bartenders from seven countries got to compete in the grand final event.

Congrats to Todd! Isn't it comforting to know he's shaking cocktails in your backyard?