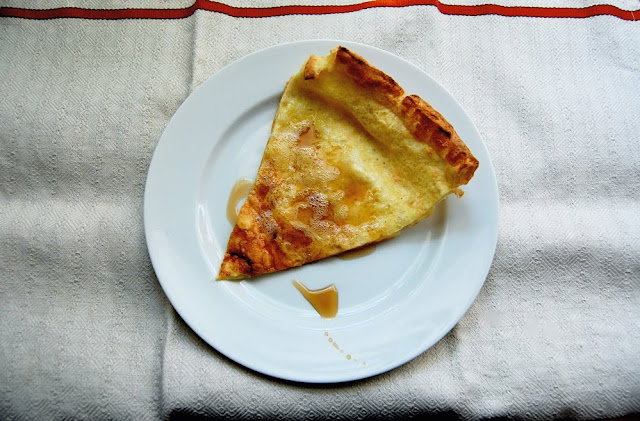 
Once upon a Google search, my long-held belief that a "David Ayer" pancake was a family recipe was corrected. It's actually David Eyre, a man who got attached to the classic Dutch baby pancake when he served it to New York Times food writer Craig Claiborne, who published the recipe in 1966 with the title "David Eyre's Pancake." 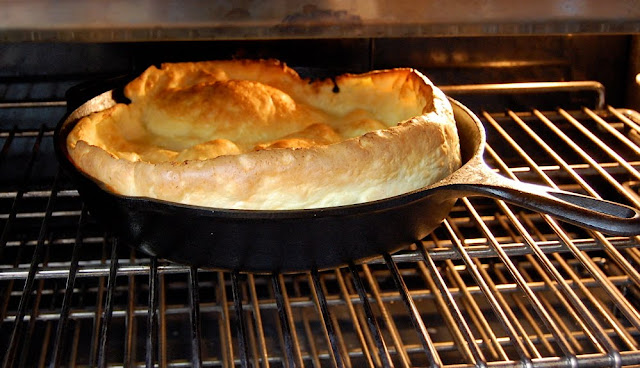 As a kid, I'd fight for those beautiful buttery edges (above) when my grandmother or parents made a David Eyre pancake for breakfast. I loved its odd look with awkwardly puffed edges and a depressed interior. And its eggy dimples sprinkled with cinnamon and sugar and a squeeze of lemon were delicious. 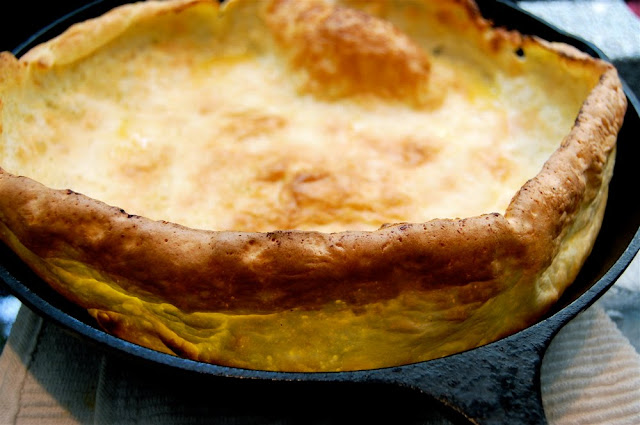 Some 40 years since it was published in the Times, immortalizing David Eyre in pancake form, it's still a regular weekend dish in my kitchen.

preparation
Preheat oven to 400 degrees. Mix eggs with milk. Add sifted flour and nutmeg. Stir together, careful not to overmix.

Put the butter in a 10- or 12-inch cast iron skillet (or other oven-safe pan) and put pan into the heated oven.

When the butter is sizzling hot, pour the batter into the pan. Bake for 15-20 minutes until the edges are golden brown and nicely puffed. Remove from oven, add a squeeze of lemon juice and sprinkle with cinnamon sugar.

Cut and serve with syrup (my favorite) or jam.

* The recipe is easy to double — just use a 9x13 inch baking dish instead of the smaller pan.