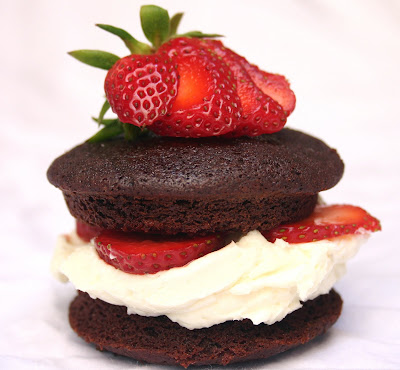 A strawberries and cream "Whoop."
As whoopie pies seize the West Coast in their quest for nationwide dominance, one enterprising baker here in DC hopes to bring the city its first bakery dedicated to the sweet, cream-filled treats.

Last week, I sat down with McKee Floyd, who left her job on Capitol Hill in March to pursue her dream of opening a whoopie pie bakery. She's hoping Whoops! will open sometime next spring in a location to be determined. In preparation, she's been trained by two of the city's best local brands, working at Sweetgreen and cutting her baking chops at CakeLove.

The New England native says she's drawn to whoopie pies — or "whoops" as she's taken to calling them — for a number of reasons, like a great frosting-to-cake ratio in every bite and endless flavor combinations. And, "it has that great nostalgic quality that people love," she says.

She's been working on recipes, and the classic chocolate version I got to sample would indicate she's off to a strong start. The richly flavored cake sandwiched a shiny, super fluffy frosting in place of the traditional marshmallow filling.

One idea she has for her shop (that I love) is a custom whoopie pie bar where you'll be able to choose your cake, frosting and additions like seasonal fruit, crushed cookies and anything else that might strike your fancy like ... bacon bits? Why not.

And once she has her Whoops shop up and running, Floyd hopes to expand on her "modern American desserts" tagline with chipwichs, pudding bars and the like. "I want to focus on desserts that aren't as conventional."

For now, Floyd is focused on baking her Whoops for large events (100-plus per order, please), and you can follow her on Twitter @WhoopsBakeshop.

And of course, stay tuned to Metrocurean for news on where Whoops might land.