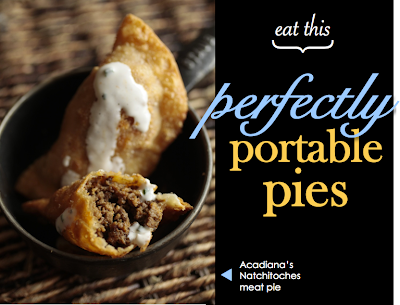 Take some dough, mix up a filling, be it savory or sweet, and wrap the dough around it. Fry or bake. Grab one and go. The pastry-as-pouch culinary technique spans the globe, from Spanish empanadas and Indian samosas to Bolivian salteñas and Louisiana's Natchitoches meat pies. (Not to mention their processed cousins, Hot Pockets and Pop Tarts.)

Replace whatever handheld device may be glued to your fingers with one of these stuffed pastry pies available in the DC area:

Acadiana's trio of pies: Did you know the Louisianan town of Natchitoches (say it nack-uh-dish) has a whole festival dedicated to their famous meat pies? You can try them right here in DC at Acadiana, served alongside a crawfish pie and a vegetable pie with black pepper buttermilk dipping sauce.

Patty Boom Boom's Jamaican meat patties: This reggae hot spot on U Street sells the Jamaican spin on this global dish, filled with jerk chicken, spicy ground beef, veggies, or my favorite, guava goat. Wash them down with the potent rum punch. 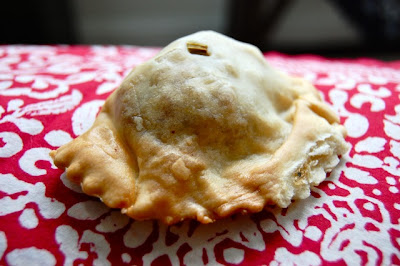 Chris' Marketplace empanadas: Available at area farmers markets including the Penn Quarter and Dupont FreshFarm Markets, Chris' empanadas ($3) come with fillings such as smoked blue fish, red kale and mushroom. The perfect snack for fueling your walk around the market. (The gazpacho is delicious, as well.)

Ted's Bulletin's pop tarts: For a sweet take on the pocket pie and an update on a childhood favorite, the new Ted's Bulletin on Barracks Row bakes up homemade pop tarts, filled with strawberry jam and topped with icing.

More sources for pastry pockets: DC classic Julia's Empanadas, Rasika for chocolate samosas, and NoVa's My Bakery and Cafe for salteñas and empanadas. Chime in with your fave in the comments.