The Big & Small of DC Dining: Carmine's Packs In 700 Seats 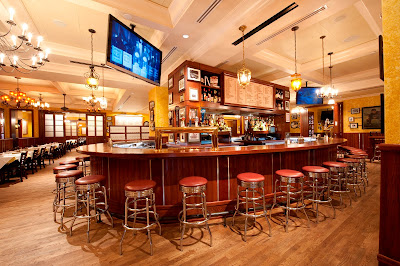 The new Carmine's in Penn Quarter.
Photo courtesy Carmine's
Touted as the largest restaurant in the District, New York-export Carmine's opens its doors today in Penn Quarter. The Italian spot is dishing out eggplant parmigiana, housemade meatballs, saltimbocca and more family-style dishes to a whopping 700 seats. That's about the population of Berkeley Springs, West Virginia, to give you some perspective.

Which got me thinking about DC's biggest and smallest restaurants. In addition to Carmine's, we have quite a few eating establishments that seat more people than live in some small towns.

Clyde's of Gallery Place weighs in at 23,000-square-feet and just more than 500 seats, and their Ashburn outpost has about 800 seats. The restaurant group is planning another behemoth: a 35,000-square-foot location in the former Border's space at 14th and F streets NW.

On the other end of the scale, there are places like José Andrés' minibar (a six seat restaurant-within-a-restaurant), the tiny Japanese jewel Makoto (around 25 seats) and Komi (around 30 seats).

I'll throw this out to the most knowledgeable diners I know: Can you savvy readers help me create a list of DC's largest and smallest sit-down restaurants, by number of seats?