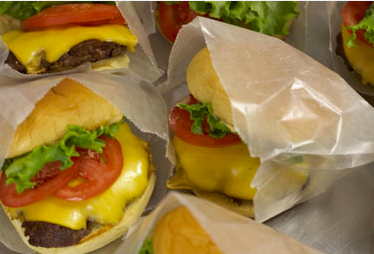 Shack Shack burgers ... they look excited to visit DC.
Photo: shakeshacknyc.com
While I was standing in one of DC's longest lines (love ya, DMV!), news broke that the cause of one of Manhattan's longest lines is heading our way: Danny Meyer's Shake Shack. Yay, lines!

The juicy rumor of Shake Shack's DC expansion has been floating around food lover circles all summer. Serious Eats reported today that the burger and shake restaurant announced its official plans to open at 1216 18th St. NW, formerly a Fuddrucker's, sometime in the first half of 2011.

Will you queue up for griddled burgers and frozen custard?