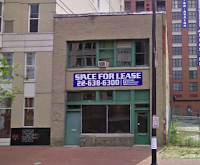 Mike
Isabella has had a lot on his plate. The chef just got back in town after
filming Bravo's Top Chef
All-Stars in New York and in the next month, he hopes to start
construction on his new Italian restaurant in Penn Quarter.


Metrocurean
caught up with Isabella, who will open Graffiato
at 707
Sixth St. NW (at right) sometime early next year, to get the dish
on what the Top Chef alum is cooking up for DC diners.


Having
cooked pretty much every other type of cuisine over the years, Isabella
says he's just now turning to the food of his childhood. "During my
whole career, I never wanted to cook Italian food because I grew up
with it," the New Jersey native says. "As I get older, it started
bringing me back to my roots."


The name Graffiato means "scratched" in Italian, and Isabella says it
historically refers to a form of expression (see: graffiti) in which
people would scratch messages on surfaces. The restaurant, he says, "is
an expression of the food I grew up with."


The "Italian-inspired"
joint, which will fit 150 seats over two floors, will serve wood-fired
pizzas, pastas, charcuterie and small plates.


And for anyone
rolling their eyes over the "small plates" bit, Isabella sums up the
appeal nicely. "Growing up when we would eat on Sundays, there were like
10 things on the table. I wanted to recreate that. I enjoy going to
places where I can try a little of everything," he says. "I don't think
it's a fad or a style. It's just a way people eat."


To fill
glasses at Graffiato, Isabella says the majority of the wines will come
from the United States. He promises bottles from Virginia, Arizona and
Long Island, as well as the expected West Coast sources.


Graffiato
general manger James Horn, who worked with Isabella at Zaytinya and recently oversaw the
beverage programs for New York heavyweight chefs Michael Psilakis
and Scott Conant, will be creating the cocktail list.


As for the decor, Isabella wants to channel the hole-in-the-wall Italian
places he grew
up going to, and when he first saw the long-vacant 1940s building, once
home a print shop, he thought, "This is it."


"I don't want a fancy place. I wanted
that very urban look. It's beat up, which is good," he laughed. As a
resident of the neighborhood, he added, "I want to make it a local place
where people can go and not spend a lot
of money."


Also up Isabella's chef coat sleeves: a secret chef's menu with
enticing options that take the concept further, "whether it's brains or
innards."


The chef is hoping for a February or March opening for Graffiato.


And no, he wouldn't tell me anything about the upcoming Top Chef
All-Stars season, other than, "I wouldn't go back if I didn't think I
could win."