Meat awaits a dunk in the hot pot at Uncle Liu's.
Photo by Anne Henochowicz


Though you wouldn’t know it from last week's temperatures, we are
slowly edging toward fall and that means Chinese hot pot season. It’s
really a winter food, due to the extreme fire element of the whole
affair — not just the boiling pot of broth before you, but the meats,
the mushrooms, even the types of mushrooms.


But tradition is thrown to the wind at Uncle Liu’s Hot Pot, which opened
earlier this year in Falls Church, where you can order a firey hot pot
no matter the season.


Uncle Liu’s is one of the few restaurants
in the DC area to advertise hot pot to non-Chinese customers. In many
restaurants, the Chinese menu is nothing like the English one and patrons have to dig to get details on favorite dishes not listed. For years,
you had to know the little place in Rockville or Dupont with the
“secret” hot pot menu.


I’ve had hot pot many times before in China. And I’ve had it at friends’
houses — it’s the easiest way to cook and entertain at the same time.
But as cheap as electric hot pots are at the Chinese grocery store, it’s
nice to have the server set you up and come around with a kettle of
water to keep your broth going.


And it’s nice to have it at a place where you don’t have to order off
the invisible menu to get your fix.


Uncle Liu’s offers a pretty
authentic experience. Plenty of people in China eat hot pot
year-round. It’s the perfect social event: an interactive culinary
affair where raw vegetables, paper-thin rolls of fatty meat and frozen
tofu are brought to the table to be cooked then and there by the guests.
(When you freeze tofu, the water turns it into a sponge. In the broth,
it expands and sucks up all the juices.)


Pick up a slice of lamb, swirl it in the broth for thirty seconds, mix
it into your dipping sauce, and enjoy. It takes a while for all the food
to be cooked and eaten, so the guests will sit for hours, throwing in
some more fish balls while they talk and drink. Sadly, Uncle Liu’s does
not have a liquor license — mild Chinese ale is really the perfect
accompaniment to hot pot.


The hot pot is divided into two
sections, one for a mild broth with healthful goji berries and garlic
slices floating in it, and another for a spicy broth of chilies and la you (hot oil).


Unique to Uncle Liu’s, so far as I know, is the buffet of dipping
sauces. As your pot comes to a boil, you walk over to fill a metal bowl
with peanut sauce, red tofu sauce, freshly minced garlic, and other
ingredients. Uncle Liu’s is meant to be a Sichuanese affair (read:
spicy), so a bowlful of la you with garlic and scallions is the most
authentic way to go. Beijing hot pot tends to favor sesame sauce. But
since it’s not January, you might as well make a modern concoction or
two.


The best hot pot foods? Enoki mushrooms (jinzhen’gu) and bean thread noodles
give the broth and sauce the perfect surface to cling to, like spaghetti
in a good tomato sauce. A plate of meat and frozen tofu are musts. And
bring your friends.

Uncle Liu's
is located at 2972 Gallows Rd. in Falls Church. 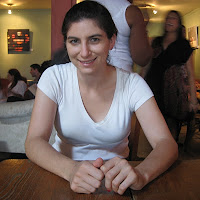 Anne Henochowicz recently finished her
M.A. in Chinese Literature at The Ohio State University. She has
written for

34th Street Magazine and the Graduate Journal of Asia-Pacific Studies. She blogs at Chinese
Checkout
.